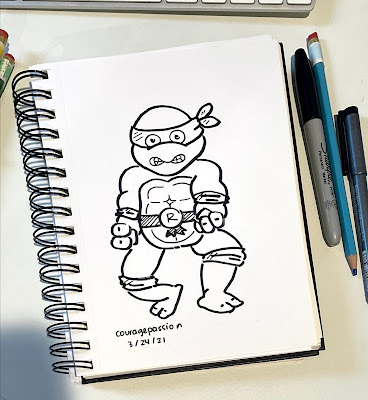 I remembered when I was little, back in Mexico, I loved playing with my cousin to be one of the Teenage Mutant Ninja Turtles 🥷 (in Spanish Las Tortugas 🐢 Ninja). A while ago, I found in Netflix a documentary called The Toys That Made Us and there was an episode dedicated to the Ninja Turtles where they explained that the cartoon was originated from a comic book created in the 80s.

So, from my recent interest in graphic novels, manga ind the different fields of Illustrationwhere you can develop as an artists, last week I looked for videos that explained more about the creators of this comic, the artists behind TMNT (Teenage Mutant Ninja Turtles) and after a couple of YouTube videos this was the best that I found, that's why I wanted to share it with you:

It's very inspiring to see something that started like an indie comic could turn into a massive empire, well it's kind of amazing and scary to be honest. What do you think? Did you play TMNT when you were little and a girl and wanted to be one of them? 😂 I remember also wanted to be Knight Rider (in Spanish El Carro Incredible), I don't remember if the car or the guy 🤔.